A couple of weekends ago I went to Prince’s Island Park for a performance of The Tempest by local theatre group, Shakespeare by the Bow. The group is made up of up-and-coming artists who are mentored by members of Theatre Calgary. Each performance is pay-what-you-will and is a really lovely way to spend a summer’s afternoon. I went with friends and we settled on the grass for a picnic and a show and tried to stay cool under the blazing Calgary summer sun. 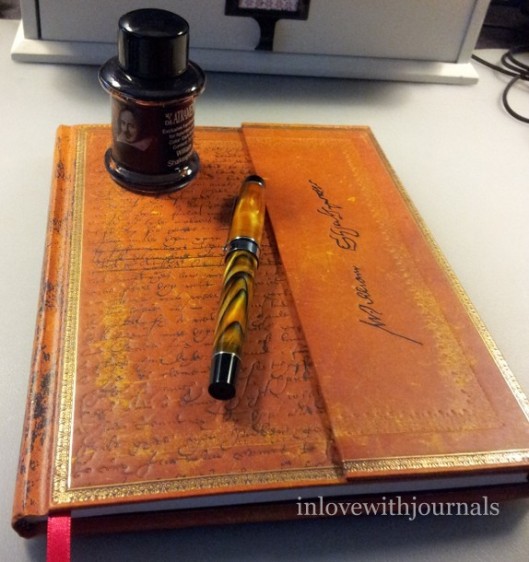 I realize I should have taken a picture of it “in the wild” as it were but it was so hot that day I was worried my phone would melt. I paired my De Atramentis William Shakespare ink with my Tiger Eye Monteverde pen and I think the combination is just stunning. I talked about this ink in 2014 in this post.

I put this quote from my fave Shakespearean play on the first page. After that I recorded my thoughts about this year’s production of The Tempest, and I made some notes on a television show I had watched the night before discussing the play and how it was so autobiographical. I intend to put any Shakespeare-related writing in this notebook. I thought I might print out pictures of the performances I see as well. I also took a neat quiz that determines what kind of Shakespearean character you are. You can take the quiz here. I got Ophelia. Luckily I know how to swim. 😉

on my bedside table today